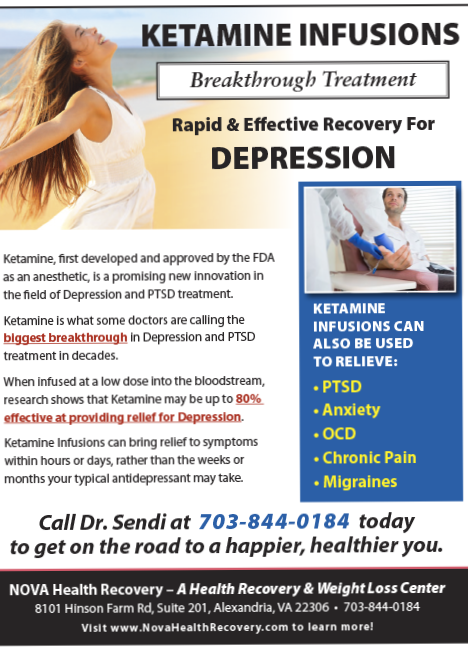 Ketamine Therapy in the Treatment of Alcohol Use Disorders and Cocaine

Ketamine works as an NMDA-receptor antagonist which allows a brief glutamate burst in the brain and subsequent production of brain derived neurotrophic factors which increase neuroplasticity. This allows for the repair of synaptic connections in the brain, neural regeneration, and neural circuit repair. Prior studies have demonstrated that ketamine infusions can allow alcoholics to reprocess drinking memories by reorganizing retrieved memories during crucial times of memory recall.

This article discussed the maladaptive reward mechanisms (MRM) that produce the development and maintenance of bad behavior, such as excess drinking. It is during the recollection of MRM’s that the memory can be destabilized and rewritten. Immediately after retrieval of a MRM in alcoholics, the use of ketamine infusions can cause a destabilization of the memory and decrease drinking behavior.

A recent study also demonstrated the use of mindfulness-based relapse prevention and ketamine therapy as an effective treatment in alcohol use disorder.

Key features of this study are:

It is known that depression and mood disorders are more common in alcohol use disorders.

Ketamine increases synapses and neuron formation, which is in demand in addiction disorders.

Addiction disrupts the formation of neurons and synapses. Alcohol also increases glutamate which is neurotoxic and destroys neuronal connections in the brain and impairs learning and planning. Cognitive rehabilitation and an enriched environment (structured schedule with activities) are helpful in AUD recovery, but the addition of a neuroplastic agent, such as ketamine, is extremely helpful.

10 weeks of cognitive behavioral therapy with ketamine infusions has demonstrated a decrease in alcohol use disorder in a prior study:

In this study three subanesthetic doses of ketamine (2.5 mg/kg i.m.) adjunctive to psychodynamic psychotherapy led to a 1-year abstinence rate (at outpatient follow-up) of 66% in a group of inpatients with AUD after detoxification, compared with 24% in a conventional-treatment control group.

Likewise, another study using motivational enhancement therapy (MET) and Ketamine infusions at .71 mg/kg decreased alcohol use such that 47% of the ketamine group was using alcohol versus 59% of the ‘placebo’ group at 21 days.

The current study referenced in this article demonstrated that the alcohol use reduction was maintained for 6 months relative to the several weeks that ketamine reduces depression. Ketamine has been used successfully with repeated dosing over time. A study by Murrough et al (2012) demonstrated the efficacy of depression reduction using repeated ketamine infusions. Again, ketamine is a treatment, not a cure, and unlike traditional antidepressants, which are taken daily, ketamine can be used periodically to significantly reduce depression with few side effects. In the study by Murrough et al, a series of 6 ketamine infusions at 0.5 mg/kg over two weeks had a 70% response rate for treatment resistant depression.

Reduction in alcohol intake in this study and abstinence over 6 months was demonstrated to improve liver function tests, a key indicator in health improvement.

Ketamine also has demonstrated the ability to decrease cocaine use with infusions of 0.41 mg/kg and then 0.71 mg/kg separated by 48 hours. There is decreased motivation to use cocaine as well as decreased cue reactivity to cocaine after ketamine infusions. This may be due to decreased glutamatergic inputs that trigger cocaine use. Cocaine alters glutamatergic flow between the prefrontal cortex (the CEO of the brain) and limbic centers (more emotional areas) and these cause the decrease in salience of normal rewards, such as food, at the expense of increased drug use. Abnormal glutamate signaling in key areas of the brain, especially the anterior cingulate cortex (ACC) is linked to depression and is altered by ketamine infusions, which increases neuroplasticity.

Studies of ketamine treatment of AUD by Krupitsky et al. Utilized high doses of IM ketamine (0.3-0.5 mg/kg), interpersonal and aversion therapies, as well as other drugs. There have been no dose ranging studies regarding ketamine use in AUD, but the current study demonstrates the safety of repeated dosing of the medication.

The evidence for the use of ketamine therapies with psychotherapy is increasing for the treatment of Alcohol and cocaine. As continued studies are performed, clinical practice demonstrates results that have been better than traditional therapies. At NOVA Health Recovery, we generally use a series of 4-6 infusions over 2 weeks to initiate care with follow up infusions to maintain efficacy. Mindfulness practices are important parts of the treatment paradigm. Therapy, structured lifestyle, exercise, diet, and stress reduction are important components of successful treatment.